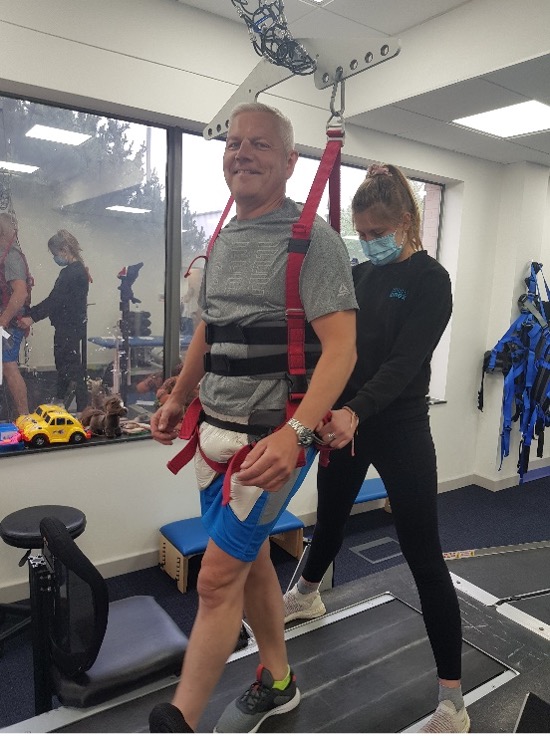 Am I chasing rainbows in trying to walk properly again? I’ll let you decide.

My walking has been in decline since I was diagnosed with PPMS about twelve years ago and in the last four years it started to nose dive along with everything else. To stop the progression of my MS I had stem cell therapy in Mexico two years ago. That stopped the rot but it could not turn the clock back on my walking. I walked short distances slowly, with a stick and frequently ended up on the floor (whilst trying to maintain my dignity!).

Mike at the Samson Centre has worked hard to strengthen my legs and core muscles. This has been very helpful in reducing falls. The gym has also kept me sane but I still couldn’t coordinate the simple task of putting one foot in front of the other for more than a few steps at a time, no matter how many drills Mike patiently went through with me.

The turnaround came from seeing a piece on the local tv news about a charity that was helping people with spinal injuries learn to walk again. They showed a little girl who had a severed spinal cord walking on a treadmill, whilst supported by a harness. The charity was Neurokinex. https://neurokinex.org/  Their website told me they help people with any form of neurological injury, including MS. My spinal cord and brain may be a bit moth eaten but it is not severed so I thought it was worth a try. I have now been going to them on a weekly basis for six months. I sometimes wondered if I was making any real progress. My gains have been so gradual it has been difficult for me to notice the changes, although I feel fitter and more confident in my movement. I now know what to do with my feet when I walk.  I can see from their computer screen that the harness is now taking less weight but is it really doing any good? I am pleased to say that my recent assessment showed I am actually making great strides (although greater strides would be a more correct description as my step length has increased).

The results are as follows:

Dynamic Gait Index – 21/24/ was 18/24 (increases in walking ability whilst turning head horizontally, walking around obstacles and walking over steps

There are two facets to the locomotor training that Neurokinex offer me. (They also have WPS (wide pulse electrical stimulation), a new form of FES (functional electrical stimulation) but I have not used that). The first facet is a very targeted physio/gym stretching and exercise programme. This is very similar, if not identical to the work that I have been doing with Mike at the Samson Centre. The second is weight supported treadmill training. They were emphatic that I would not get much benefit from the treadmill unless I was backing it up with exercise. I am exercising at the Samson Centre and treadmill training with Neurokinex.

At Neurokinex I am strapped into a harness that supports my weight above a treadmill. The amount of weight taken can be adjusted, as can the speed of the treadmill. To begin with the harness was taking 30% of my weight. Two trainers assisted me, one was holding the harness from behind to stop me swaying from side to side and the other trainer was placing each foot on the treadmill to mimic a step pattern. This continued for the first couple of sessions but after that I was able to move my feet and legs in a stepping motion with minimal intervention from them. They no longer hold the harness to prevent me swaying as I walk. I can now walk for 40 minutes with close to zero weight taken. This is a slow walk and the goal is to increase the speed. They will make the harness take more weight until I am able to cope with the faster gait, then once again gradually reduce the assistance. The assistance also varies through each session. I now start at about 10% weight taken and then they reduce it once the correct movement pattern is established. After the first sessions I found that my slow walking improved for 24 hours or so and then I reverted to my bad habits. The improvement is now lasting a week to two weeks, maybe longer. The hope is that my new movement patterns will permanently banish the old shuffling.

Each session is tailored to my needs and varies according to my energy levels. From the outset they told me that improvement would not be linear and there would be ups and downs. My trainers are optimistic that I will walk properly again. This is not blind hope but is based on their experience and training. Neurokinex are affiliated to the Christopher and Dana Reeve Foundation’s Neuro Recovery Network in the US who have funded extensive research into neurological rehabilitation.  https://www.christopherreeve.org/living-with-paralysis/rehabilitation/neurorecovery-network-and-rehabilitation. They have 12 centres across the US and Neurokinex has three sites in the UK. My trainers have been trained by this foundation and I am working to their protocols. These were initially designed to help Christopher Reeve (Superman) and, although he could not breathe without a ventilator, the improvements to his health were the impetus to the foundation. Their programs are designed for people with ranging abilities from tetraplegic to relatively minor gait issues like mine which is why I think it could be so valuable in the MS community. I’m the guinea pig.

I am told and have found that the body relearns the feeling of walking through the sensation of the feet striking the treadmill on each step and the muscle control required to achieve this. This sends signals to the spine and then to the brain. Neuroplasticity plays a part but walking patterns are controlled by a central programming generator in the spine rather than solely by the brain. This is how Neurokinex can help people with severed spinal cords regain movement.  With MS, bad walking habits become ingrained, and this approach is about replacing those habits with more effective movements. I have found that the treadmill is joining the dots between the theory and exercise that I have been learning at the Samson Centre and actual walking. It is the missing link.

Despite Neurokinex’s help, I know I would not have made any progress without Mike and the Samson Centre. Having seen me walk on the treadmill, Neurokinex have made some suggestions on areas to strengthen such as my hip flexors and hamstrings. Mike has enthusiastically taken their feedback and developed them further in our sessions.  It has been a great team effort.

Neurokinex is a fun place to be and like the Samson Centre it is about enabling people. I have told them that I want to run again.  They have said it is possible but I suspect I am pushing my luck! Walking properly will be enough. They are certainly encouraging me and the figures show it is a real benefit.  So, am I chasing rainbows?

For the avoidance of doubt these are my personal views and not the views of the Samson Centre. I am a trustee of the Samson Centre but am writing in a personal capacity rather than as a trustee.   I have no connection or affiliation with Neurokinex other than attending training from them which I fund myself. Neurokinex charge £70 for each session which is an hour. They are based at Hemel Hempstead,  Gatwick and Bristol.